January 11, 2010
Drivetrain losses are an important factor in cycling. A sort of canonical number is they are responsible for 3% of total power during high-intensity riding. Wilson's Bicycling Science 3rd edition (2004, MIT Press) page 343 shows data indicating at 200 watts, losses vary from 2.4% to 3.1% among three gear choices with a clean chain:

A comparison of a "no rust, lubricated" chain to a "rusty, dry" chain yields a difference of 4-5% (absolute) at 200 watts, which is huge.

Anyway, from these data it's clear a fixed "drivetrain efficiency" is a poor model. Even if you allow the efficiency to vary from one gear to another, there's a clear power dependence. And allowing an "efficiency" to vary with power is obviously obfuscated: you're applying a model that drivetrain losses are proportional to total power but then allowing that proportionality constant to vary with power. Better to use a proper model.

Spicer, in Human Power (2000) did some very nice measurements using motors, which allowed him to set the cadence, gear, and power independently. Thus he was able to measure drivetrain efficiency at the same chain speed and tension for different rear cogs. 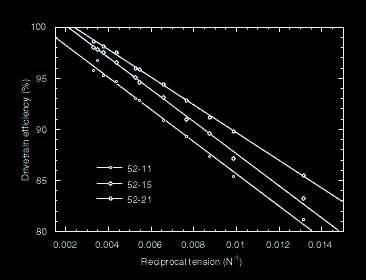 Spicer's efficiency measurements as a function of reciprocal chain tension for each of three rear cogs
These were his conclusions:

It was found that larger sprockets provide more efficient transfer of power while smaller sprockets proved to be less efficient. Simple, frictional loss models were developed that gave sprocket-size loss variations that agreed with those variations measured experimentally. Typically, a 2–5% loss difference was measured between the 52–11 and the 52–21 sprocket combinations depending on the drive operating conditions.

It was found that chain-line offset and chain lubrication have a negligible effect on efficiency under laboratory conditions.

A follow-up article by Walton and Walton (a high school senior and her college professor father) reanalyzed Spicer's data for the case where power and speed were fixed, but cadence was allowed to vary. This more accurately represents the case where a rider is trying to choose in which gear to ride on a given section of roadway.

Personally, I find Spicer's claim efficiency is higher at higher chain tension to be puzzling. All other things equal, how can increasing the chain tension reduce the power loss in the chain? It makes no sense. We were all taught in high school physics that frictional force between two surfaces is proportional to the normal force between those surfaces. If the chain tension increases, the links and pins of the chain should be pressed harder together, and drivetrain losses should increase, not decrease as Spicer suggests. Yet the measurements are real.

The issue is that chain tension is not an independent variable. Power delivered by the chain equals the product of the chain tension times the chain speed: that's simple physics. So if chain speed is fixed, and tension is increased, then power is increased. Instead of pursuing this further, and getting confused, I'll propose my own model for drivetrain losses, then compare the results with Spicer's data. 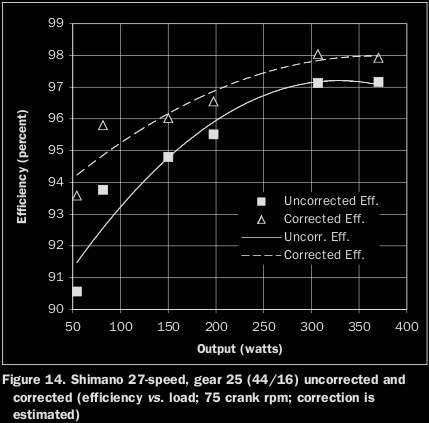 Frank Berto and Chester Kyle's data.
Then in Human Power 52 (2001), Frank Berto and Chester Kyle did some nice measurements comparing a geared drivetrain (a Shimano Ultegra mountain bike group (?), 22,32,44 by 12,14,16,18,20,23,26,30,34) with various internal geared hubs. The advantage over the Spicer data was that more gear combinations were tested, although each gear combination was tested less extensively.